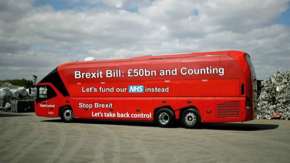 The crowdfunding for the Anti-Brexit national bus tour has been
successful and the bus with suitable painted slogans on it will now begin
its national tour on 21st February. It will start its tour at Portcullis
House next to the Houses of Parliament at 10.30am on that date, touring
London.

The aim of the bus tour is to get people thinking about the consequences of
leaving the EU, in the light of the greater, if limited, information which
we have now, than was apparent at the referendum. It is targeting 'soft'
leavers - i.e. those who voted to leave but were not committed leavers, and
who now are wavering in their view that leaving the EU would be a good
thing. The other aim is to encourage the 'soft' remainers - i.e. those who
voted to remain but who now feel that we can't change the decision to leave
the EU. The bus aims to inform (not hector or rabble-rouse), so that people
can start believing that changing the decision is possible, especially given
that prominent EU leaders keep repeating that it's not too late for the UK
to change its mind.

The bus comes to Bath on 22nd February at 9am and then about 9.45 leaves
Bath to come to Bristol, arriving here at about 10.45am. We hope to be able
to park the bus on the Centre about that time and there will be short
speeches from various politicians, as well as (we hope), the mayor Marvin
Rees, councillors, local trade unionists and business people, and we hope
there will of course be media coverage. The bus will then travel to Bradley
Stoke (probably up Gloucester Rd) arriving there around 11.20am, where the
bus will stop for more speeches etc, finally leaving Bristol for Cardiff at
around 11.45am. Everyone do feel free to visit the bus at either (or both!)
of the two stopovers in Bristol. But we have been asked by the organisers
not to i

WHEN
February 22, 2018 at 10:45am - 11:15am
WHERE
The Cenotaph, City Centre
College Green
Bristol, England BS1
United Kingdom
Google map and directions