Kate Hoey at UWE February 22nd from 5-8pm. SOLD OUT

How excited we were that arch-brexiter Kate Hoey was booked by UWE Labour Society to give a talk. Following on from the previous debacle that was Jacob Rees-Mogg we expected huge crowds, the world’s media and a great photo opportunity. Bristol for Europe got ready to Flag Bomb!

Arriving early, we navigated the maze of identical lecture rooms and found the right one. It was completely empty with the lights switched off. We trudged back to reception to find out what was going on, eventually tracked down a last minute, unadvertised room change. 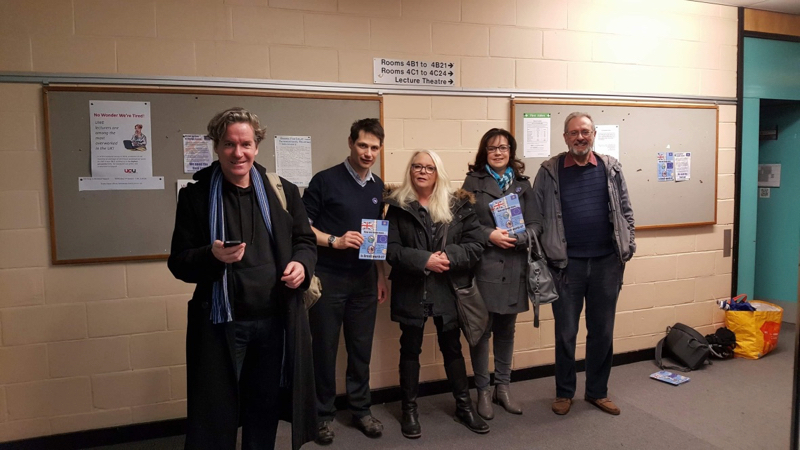 The event was billed as sold out by Eventbrite almost immediately and I was the only Bristol for Europe activist that night to have a ticket, I could hardly wait. Perhaps it had been moved to an auditorium to accommodate the huge crowds!

The police and security staff piled round us, blocking entry onto the escalator leading to the venue so we took the lift; immediately surrounded again outside the new room by uniformed burly blokes who checked my ticket. They asked that our bag of subversive materials containing EU flags, Union Jacks, #StopBrexit Banner, badges, stickers and beer mats to give away, donation box and sign up sheets, be taken away by one of our ticketless comrades.  They were determined to avoid the security meltdown at Jacob Rees-Mogg’s little party. This was getting exciting.

What a surprise! I took a seat at the back and did a rough headcount. I double checked, worked out who was staff (5 security/organisers) and looked again. There were 11 boys, 2 girls and me!

Kate’s talk had already finished by the time I found the room and she was taking questions from the audience. One young man wanted to know how the UK could improve our standing in global sporting events; another asked if Jeremy Corbyn was a Czech spy. One of the girls asked about the Good Friday Agreement and the Irish border question (at least this should be in Hoey’s comfort zone) and was seemingly happy to receive the following as an answer: ‘There will be no border between Ireland and Northern Ireland because no one wants one, it’s as simple as that’ and ‘it will only be a matter of very little time before Ireland leaves the EU in any case’.

‘It doesn’t work like that’, I said, ‘and the people of all Ireland want to be a part of the EU’. Factually correct; that the people in Northern Ireland voted to remain and are not represented in any way is perverse.

It shocked and saddened me that these lovely young faces gazed in awe at Kate Hoey, laughed at her one unfunny joke about the EU falling apart and were completely without the tools to challenge her.

The whole thing was over by 6.15pm after a late start. I decided to miss the photo opportunity and go home.

A sell out indeed.