The 12 Successes of our European Christmas

posted by Tom Brufatto | 10sc
December 23, 2016
There’s no doubt it’s been a difficult year for pro-Europeans. Nevertheless, as 2016 draws to a close, we can also look back an intense period of development - and success – for Bristol for Europe.

Our humble beginnings at the start of the summer involved a handful of organisers of three pro-EU demonstrations in Bristol coming together to discuss working together.

We agreed that the only way to keep the UK in the EU would be to form a passionate, cross-party, grassroots organisation in Bristol – and across the rest of the country.

We can now count many more as playing an active role in organising – as well as thousands of supporters registered across Greater Bristol.

We are united on the importance of rising above the intolerance and bigotry that followed the vote.

While we come from all walks of life, ages and genders, the one thing that unites us is our passion for Europe – and our pride in our European identity.

And we can list several important projects that took place over the second half of 2016 as genuine successes: 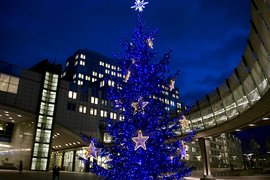 So, what can you expect to see next year?
We’d like to extend a special thank you to:
And above all, we’d like to wish all of our supporters – and indeed everyone across the Greater Bristol area – a very merry Christmas, Season’s Greetings and a Happy New Year.

Tom and the Bristol for Europe team
Donate
Subscribe with RSS