The first Annual General Meeting of Bristol for Europe was held at the YHA, Bristol on Tuesday 21st November 2017.

Andy Brown delivered his Chair's annual report and the former mayor of Bristol George Ferguson addressed the meeting after the formal business was completed.

Minutes of the Annual General Meeting 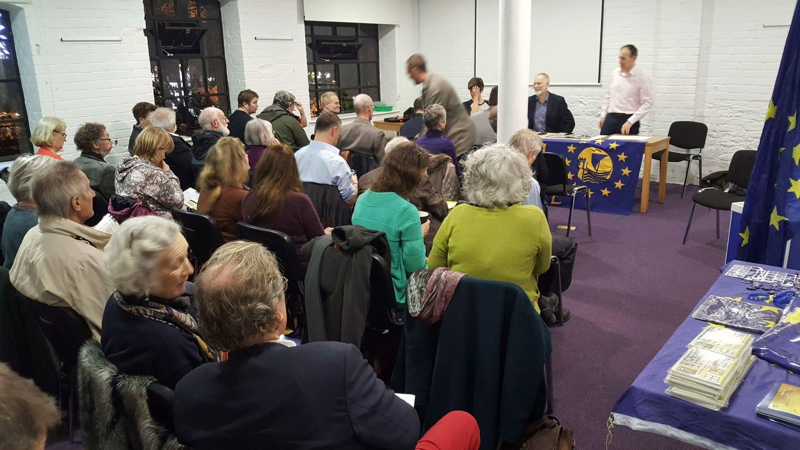 Andy Brown gave an overview of the work of Bristol for Europe (B4E) since its inception shortly after the referendum on June 23rd 2016 to date.

He also welcomed to the meeting founder members Tom Brufatto, current Chair of Britain for Europe and the first chair of Bristol for Europe, along with Sam Hickmott, an 18 year old activist who became the events officer.

A weekly newsletter sent to all supporters

Supportive meetings with MPs and MEPs

Organising hugely successful South West rally on College Green in October, with participants from Cornwall to Gloucester, including a delegation from Gibraltar.  Speakers included 4 MPs, 3 MEPs from all major political parties.

This includes a greater presence in "leave" areas, with appropriate discussions for political engagement with a wider demographic.

Increasing equality and diversity among the membership, with active participation, is also a key aim of B4E.

B4E aims to have greater use of social media to target online campaigns.

Local and national collaboration are vitally important - B4E will endeavour to engage with all like minded organisations, such as the Three Million, representing EU citizens in the UK.

A 6 month advertising campaign is being discussed for Brexit impact awareness.

A vote of thanks and round of applause was given to Andy for his great work as Chair over the last year.

The treasurer, Stephen Perry, gave a brief report on the financial situation. At 31st July our cash balances stood at £2,126. Our turnover of £9,994 included £5661 from donations and membership fees.  We spent over £1,000 on street campaign equipment.  Having started with nothing in June 2016, B4E by November has over £3,000 in the bank.  Individual donations continue to come in, the largest being one of £200.  Costs have included hosting the South West Rally.  The accounts are on the website.

Unanimous approval was given by members to accept the Chair's and Treasurer's reports.

Nominations had been received for the following posts:

Members voted to agree the above as a group, passed unanimously.

A resolution was tabled to increase the annual membership fee from £1 to £5, to be collected independently from sales on the street stalls.

Members agreed to this, but there was discussion around keeping the fee at £1 for concessions in the spirit of inclusion and equality.  Officers assured the meeting that a tiered membership will be considered. 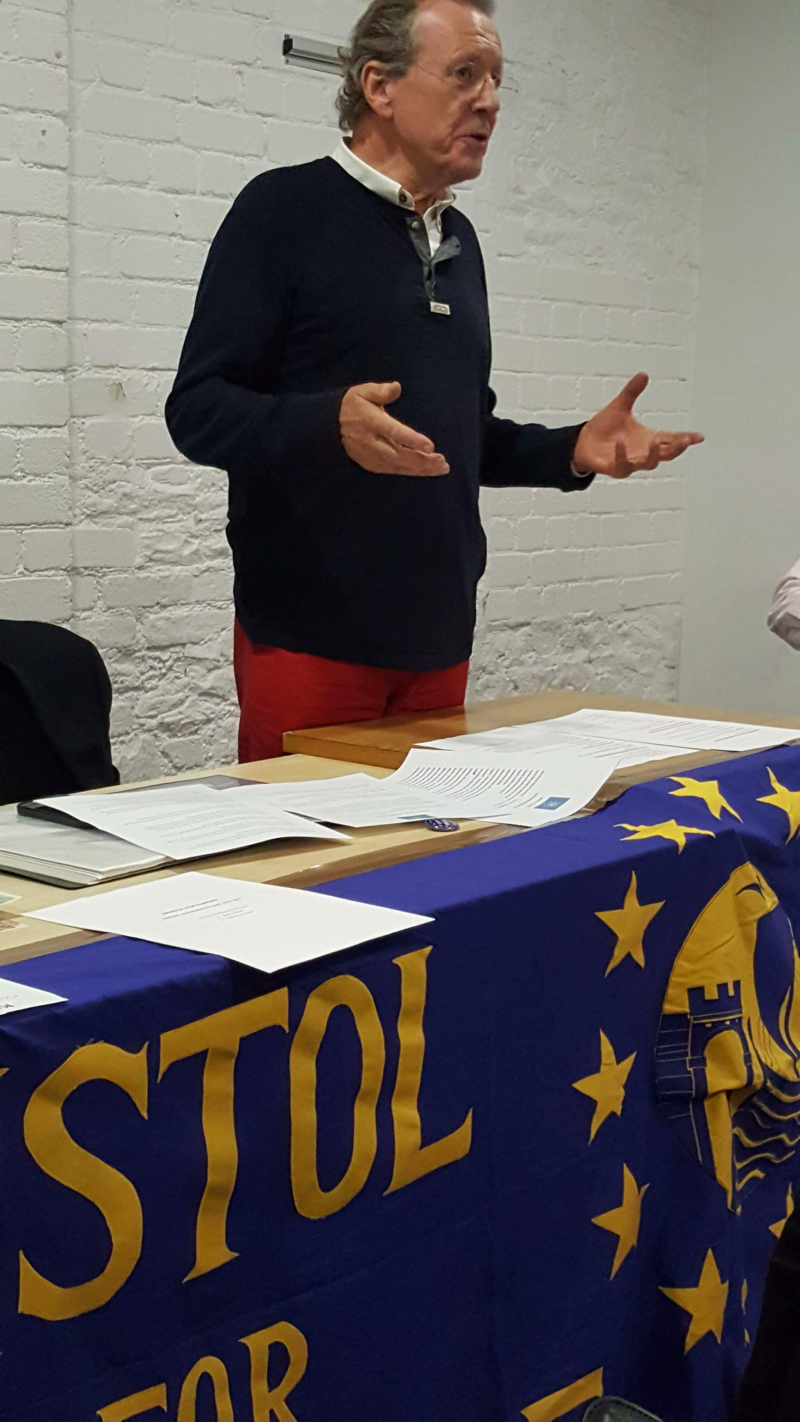 George Ferguson, the former Mayor of Bristol, told of his experiences travelling in the USA, China and Japan where people were puzzled by the UK's decision to pursue Brexit, as it was seen to be so self evidently damaging.

He explained that 66% of Bristol exports were to the EU, and our two universities relied on Erasmus exchanges, freedom of movement for academic staff and EU research grants.  There was also a real nervousness in the local business community about the effects of Brexit, and businesses felt they were not being listened to by government.

Therefore the role of organisations like Bristol for Europe was vital in keeping up the pressure on MPs, and the best hope for the UK is that parliament will eventually rescue the situation by a meaningful vote and possibly a second referendum.

George then took questions from the floor on globalisation, transport issues, and corruption in the referendum campaign. His final message was keep lobbying, talk to business, and DON'T GIVE UP!

We had a surplus of £2127 in our first year of activity.  This is available to provide cash flow for future booking of halls and coaches.

Our primary source of income is from supporter donations.  A large part of these is raised at our frequent street stalls.  They include membership fees and donations related to merchandise such as badges, wrist bands and flags.  We have also received many donations via our website.  The largest single donation we have received is £200.  The great majority of our donations are £25 and under.

We held two speaker meetings and organised coaches for a march in London.  Because all the events sold out we enjoyed surpluses on them all.

Our General Election expenditure was modest, limited by election law.

Our other expenditure relates to street campaign equipment such as stalls, marquee, flag stands and merchandise.  We also have fixed monthly costs related to our database and storage facility.

Since the year end our surplus funds have continued to grow as a result of our successful events.

Surplus on Coach Trip
Three coaches of supporters were taken to the March 2017 London Stop Brexit march. 2) Income from Membership, Donations and Merchandise

Separate records have not been kept of cash income on the stalls analysing monies related to Membership fees, Donations and Merchandise. Many people in giving money do not define what category they are contributing to.

As we do not have a licence for selling merchandise all money received in relation to those goods are categorised as donations.

Surplus on Speaker Event
These events were held in January and July at Colston Hall. 4) Mailing and Database expenses

Initially we used spreadsheets at no cost but, soon as our numbers of supporters spiralled upwards switched to “Mailchimp”, who began to charge a fee once we hit a certain number of supporters. Latterly we switched to “Nationbuilder”, which acts as a database, mailing system and website. The latter costs about £70 a month at current supporter levels.

Of the total of £611 spent, £333 relates to General Election campaign flyers. Other costs relate to flyers used on our stalls at other times or to advertise our events, such as the march in September 2016.

These costs are for three stalls, marquee, flag stands and flags, banners and other smaller items used at our public events.

Since February we have rented a space at a company called Safestore to keep our voluminous quantity of equipment. This costs £65 a month.