Conventional wisdom says that Brexit will definitely happen.  And it is most often said by those who least want it to occur.  Any number of seemingly sensible MPs sagely advise those listening that Brexit is certain.  Political commentators and even the leaders in the Guardian reaffirm this apparent inevitability.  Those who don’t conform to this now commonly accepted view are seen as living in cloud cuckoo land - extreme or delusional. 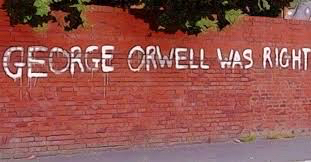 But it is the MPs and the journalists who are living in a world apart.  A world where everyone looks for certainty where certainty is not to be found.  They are huddling together for safety in “Groupthink”.

What is “Groupthink”?  Originally it was phrase derived from George Orwell’s “1984”.  He wrote about “Doublethink” in 1948.  A chap called William White four years later invented “Groupthink”, which he defined as “a psychological phenomenon that occurs within a group of people in which the desire for harmony or conformity in the group results in an irrational or dysfunctional decision-making outcome. Group members try to minimise conflict and reach a consensus decision without critical evaluation of alternative viewpoints by actively suppressing dissenting viewpoints, and by isolating themselves from outside influences”.

This feels very contemporary to me.  If true, it points to why Westminster is behaving as it is.  Our parliament has a very long history and above all a history of stability.  But what we have now is extreme instability and those who are part of it don’t want to believe it.  Above all they don’t want to believe that the two major parties are not functioning.  The troubling reality is neither the Labour nor Conservative Parties work as coalitions of common cause any more.

The Conservative Party historically has been pragmatic, sympathetic to business and averse to rapid change.  It has appealed to people who are cautious by nature, whether middle class or less well off.  It has prided itself on its managerial competence in government.  But by throwing itself into Brexit most of these values have been shattered.  It cannot hope to hold itself together for much longer.  It is now deeply and irreconcilably divided between those who are cautious by nature and those who are zealous about creating a new world of UK independence on the international stage.  The latter are ideologically looking for transformation.  At the same time the party’s membership levels have reached a low never previously experienced.  This oldest party of the democratic world is looking like a busted flush.

The Labour Party is no better off.  It was formed by Keir Hardie and others to represent those in the labour force who were appallingly treated by their employers, arguably a significant majority at the time.  It cared about poverty and deprivation.  It had a huge constituency, especially in the industrialised towns and cities.  It created the Trade Union Movement or vice versa.  It was the party of the working class and many of its MPs came from that background.  Today the working class has shrunk and industry has largely disappeared.  Its voters are increasingly the best educated in our country.  University graduates mostly vote Labour.  Labour MPs themselves are generally from middle class backgrounds and are certainly well educated.  One indication of this is that the university cities are now represented by Labour MPs.  Yet many of its traditional constituencies are the old and now faded industrial towns.  There are not enough of them to put Labour in power but they are still essential.  This Labour Party finds itself intellectually cut adrift from the much smaller working class and Brexit heightens its insecurity about its old base.  Its very weakness made it vulnerable to takeover and indeed it has now been taken over by the ideologues of the left.  It doesn’t look like a party capable of gaining the largest share of the vote in a two party system.

The lobby journalists are a part of the Westminster scene.  They occupy the corridors of the Houses of Parliament.  They have a career emotional investment in the democratic system as it is. They are also infected by the inward looking and delusional culture.

But the Westminster crowd are not stupid.  They know their institutions are deep trouble but don’t want to talk about it.  The group will is to believe it is business as usual.  But that isn’t true and they must know it.  Just as the Houses of Parliament are falling down, so are the old, traditional assumptions and systems.  The “mother of parliaments” has dementia.

Abroad the politicians and journalists are looking at the UK political  behaviour around Brexit and are astonished and bemused.  Many think we have taken leave of our senses.  Meanwhile Westminster is spending its time navel gazing, unable to look at the bigger picture.  It is incapable of taking in to account of the views of the large minority that voted Remain and is unable to hear the words of Michel Barnier, our friends in the Republic of Ireland and other allies.

Can Westminster wake up in time to handle Brexit in a coherent manner?  Are there enough MPs and journalists capable of lifting up their heads and looking at the bigger world around them?

For all our sakes we must hope against hope there are.

Treasurer of Bristol for Europe and retired Chartered Accountant and journalist.