If a week is a long time in politics, the last few feel like a lifetime. Just a month ago it seemed as though the UK was careering towards a crash and burn Brexit, the hard Brexiters firmly at the wheel, still deaf to concerns over the border with Ireland, the rights of citizens or the damage to our environment and economy. Now all of a sudden it look seems as though the fevered dreams of the hard-Leave leaders have run into reality. 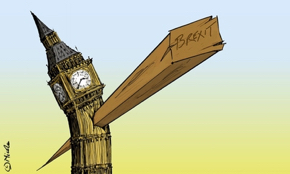 First we saw the PM forced to agree to what we have always known - that to keep the border with Ireland free and open the UK would need to maintain regulatory alignment with the EU, and probably stay in some version of the Customs Union. The option - a hard border with Ireland or an internal border between the Britain and Northern Ireland - would threaten peace and the integrity of the UK.

Politically the agreement over Ireland saw the Hard Brexiters sidelined. Not by the PM but by the reality of the world around them.  Labour too, ever vague, has begun to speak a little more openly about the need for a customs union and a single market. Days later the Conservative rebels finally found their voice and with the support of opposition Parties voted to ensure that Parliament would have the ultimate say on any final deal. The public mood is starting to turn, with a poll in the Independent suggesting, for the first time, that Remain would now have a 10 point lead. Just one poll of course,  but it will be a trend worth watching.

The point is that for the first time since the referendum it feels like there is a real chance that Brexit can be stopped, and even if not, it is now much more likely that the UK will head for some kind of softer Brexit, maintaining a close and civil relationship with its European partners, perhaps adopting the Swiss or Norway models.

This shift is the result in large part to the ongoing grassroots campaigning by groups like Bristol for Europe. People like us all over the country who have refused to lie down and accept whatever desperate deal was forced on. We need to keep that fight going. But we also need to take some time to think about what comes next.

The truth is that our country is deeply divided. If we are to have a hope of really stopping Brexit, or securing a future we can all live with, we need to think about how to heal wounds. Our country has huge structural problems. Many of those who voted for Brexit did so in the hope that something - anything - would change. Yes there were lies and xenophobia a plenty, but there was also a genuine desire to shake up the system. I can understand that. Many times I have wanted to do it myself. Brexit was a wrecking ball swung into the political establishment, and it worked. Whether we stay in Europe or not the world has changed. The UK has changed. Europe has changed. Even if we reverse Brexit things wont go back to how they were before the referendum.  And nor should they.

Arguing for a different kind of future is hard for a group like Bristol for Europe. It contains people from all parties and none. It is dedicated to a single issue. But the networks it has created and the people it has motivated are as likely as any to be the ones who help shape what comes next. We need to think about the causes of the ongoing Brexit debacle, and how to progress. Do we need voting reform? A new kind of economics? Should we support calls for a constitutional convention to argue for a proper regional devolution settlement and reform of the House of Lords? This is a revolutionary moment for the UK, and for the first in in a long time, big questions deserve to be on the table and not swept aside or fudged once again.

None of this changes the importance of the EU of course, but I feel we are much more likely to win that fight, and secure a working peace afterwards, if we are thinking seriously and sensitively about the kind of country we want to be.

Alasdair Cameron is an officer of Bristol for Europe